Howard’s Rug Company of San Diego is nothing like it sounds. What was started as a carpet cleaning and area rug business by Howard Riddle in 1943 is now a commercial contracting firm with annual revenue of between $25 and $30 million. Today, there is no Howard, and there are very few area rugs. However, while the mom-and-pop style name may belie the business’ role in the marketplace, it perfectly embodies the way president Rob Hailey and his employees conduct business. 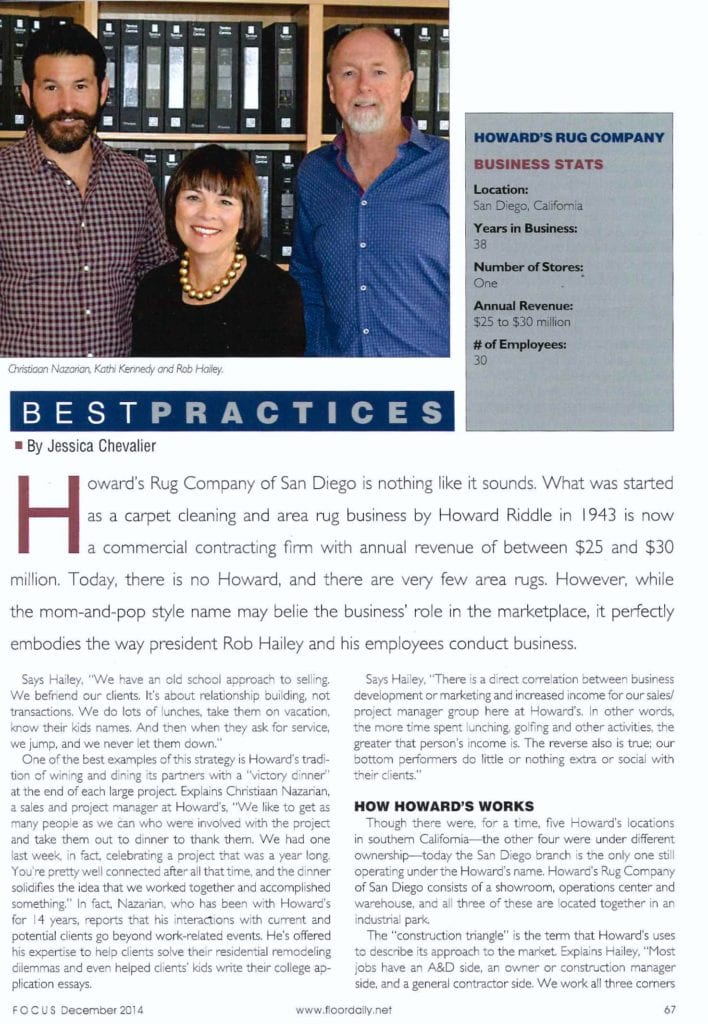 Says Hailey, “We have an old school approach to selling. We befriend our clients. It’s about relationship building, not transactions. We do lots of lunches, take them on vacation, know their kids names. And then when they ask for service, we jump, and we never let them down.”

One of the best examples of this strategy is Howard’s tradition of wining and dining its partners with a “victory dinner” at the end of each large project. Explains Christiaan Nazarian, a sales and project manager at Howard’s, “We like to get as many people as we can who were involved with the project and take them out to dinner to thank them. We had one last week, in fact, celebrating a project that was a year long. You’re pretty well connected after all that time, and the dinner solidifies the idea that we worked together and accomplished something.” In fact, Nazarian, who has been with Howard’s for 14 years, reports that his interactions with current and potential clients go beyond work-related events. He’s offered his expertise to help clients solve their residential remodeling dilemmas and even helped clients’ kids write their college application essays.

Says Hailey, “There is a direct correlation between business development or marketing and increased income for our sales/project manager group here at Howard’s. In other words, the more time spent lunching, golfing and other activities, the greater that person’s income is. The reverse also is true; our bottom performers do little or nothing extra or social with their clients.”

HOW HOWARD’S WORKS
Though there were, for a time, five Howard’s locations in southern California—the other four were under different ownership—today the San Diego branch is the only one still operating under the Howard’s name. Howard’s Rug Company of San Diego consists of a showroom, operations center and warehouse, and all three of these are located together in an industrial park.

The “construction triangle” is the term that Howard’s uses to describe its approach to the market. Explains Hailey, “Most jobs have an A&D side, an owner or construction manager side, and a general contractor side. We work all three corners of that.” Typically, Hailey operates on the owner/construction manager side; a business development specialist works with A&D and a project manager, like Nazarian, works with the general contractor. Using this approach, the Howard’s team is building relationships with everyone involved with the project, and this supports the company’s general strategy of establishing strong relationships with good partners and then selling additional services to these established clients.

In addition, Hailey has found that saturating the market on all three sides of the triangle puts Howard’s in the position of hearing about new jobs months or even sometimes up to a year before competitors do. Because of that, often before a competitor is even wise to an emerging opportunity, Howard’s is already working on building relationships with the new job’s team. Hailey reports that the reason Howard’s employees can concentrate so heavily on business development is because the back end of the business—logistics, operations, human resources and the like—are so finely tuned that the team has both the freedom to find new business and the confidence that they can take good care of them.

Like many of the best business minds, Hailey recognizes that a widget is a widget. “I’m not particularly fond of flooring, but opportunities came along, and we got good at it. Ultimately, this is a sales and service business. Flooring just happens to be the vehicle. It could have been tree trimming or roofing or anything.” Understanding that a business should not strive to be the best compared only to those in its own industry, but to be the best when compared to all industries, is a belief that strong leaders share.

COMPANY CULTURE
“In the early days,” says Hailey, “we’d sell anything to anyone that we could. I used to drive around and look for construction sites. When I saw one, I’d stop and ask if they needed flooring—and I would stay until they said yes.” That tenacity is, no doubt, what has made Howard’s a successful business and Hailey a successful leader. According to business development specialist Kathi Kennedy, who has been with Howard’s for 15 years, one of Hailey’s greatest strengths as a leader is that he doesn’t set limits. Says Kennedy, “Rob allows his employees to reach for the stars. There are no limits on how much money we can make if we work hard. And here, everyone wants to work hard. When you start, it can be overwhelming to see these people who are incredibly dedicated working long and hard hours. But you get caught up in it, too. Plus, we truly like each other. We work as a team. Everyone is happy for the person who makes money. That’s why so many people have stayed here so long.”

Hailey notes that one of his enduring challenges is competing for the best employees against the many technology firms in southern California. He explains, “The challenge is to convince people that the construction or flooring business offers the same opportunity that high tech business does. We want people to approach it like career, not just a job. We are fortunate to keep the people who realize that this is a nice way to make a living. The employees here drive nice cars. They live in nice houses. They send their kids to the colleges of their choice. It’s a good gig. It doesn’t compete with Google maybe, but it does compete with what’s down the street and around the corner. Very seldom do people, after they see the opportunity, leave.”

According to Hailey’s employees, however, it isn’t just the financial incentives that keep employees at Howard’s. “Rob is humble, and he instills that trait in people who work for him,” says Nazarian. “Here, you’re inspired to work harder and to ask yourself what you can do to be better, because that’s what Rob is doing, too. When you have that example, you don’t jump off the phone at 4:00 p.m. or not go after that extra project.” Hailey adds, “This is just a small business, a cog in the wheel. We are not important. If we don’t go out and sell every day, we don’t do our job. It’s about luck and sincerity. After you get the team going, it’s easier to attract new people. Energy feeds on itself. We got here by working harder and caring more.”

THE FUTURE OF HOWARD’S
Though Hailey hasn’t established any timeline for stepping out of the leadership role at Howard’s, he does have a good idea of what he wants for the business in the years to come. “My long range goal is to keep the business running and to help it continue to be a great place to work. Under my guidance or the next leader’s, we want employees to continue to make a nice living and to be proud of the service that we provide in the marketplace.” With both a son and a son-in-law working in the business, he is not interested in selling to a third party. “I am absolutely confident that we want to keep the business in the family. I have had several opportunities to sell, but that’s not my intent. I hope that the business takes care of the next generation of my family and my employees. I want to be able to walk in the door in 15 years. I may not be as active in the business then, but maybe someone might want my advice on something.”

CONTRACTOR KARMA
Howard’s has been a Starnet member for 15 years and is currently working with another member, Rubenstein’s, on developing a program called StarNetworking. The goal of the program is to establish greater rapport among Starnet members so that when an opportunity comes outside of a particular member’s reach, they can confidently refer another contractor for the job. Explains Hailey, “Let’s say I have a developer in town who is expanding into Seattle. I don’t want to go to Seattle, but I can call a developer and tell him to talk to Rubenstein’s, to make the introduction.” Hailey stresses that contractors should focus first on giving opportunities and count on receiving a payback for their goodwill later.